Home Uncategorized 11 Things Not to Do in Phuket

11 Things Not to Do in Phuket

Things Not to Do in Phuket

Just like in any country, there are a few customs everyone should respect and a few things you should not do in Phuket. Some are petty and casual; some are serious and could lead to real trouble. If you are familiar with Thailand, you probably know and respect those rules, even the untold ones. Many of them seem so obvious and common sense; we shouldn’t even have to mention them. And yet, it is well known that people often do things outside their country they would never consider in their own so if you know about the rules listed below and respect them already: well done! If you don’t, maybe you should think about it.

Also, let’s add that Patong is not really Thailand  so it’s a little more easy-going than the rest of the island, but once you go out of Patong, people might frown at you. 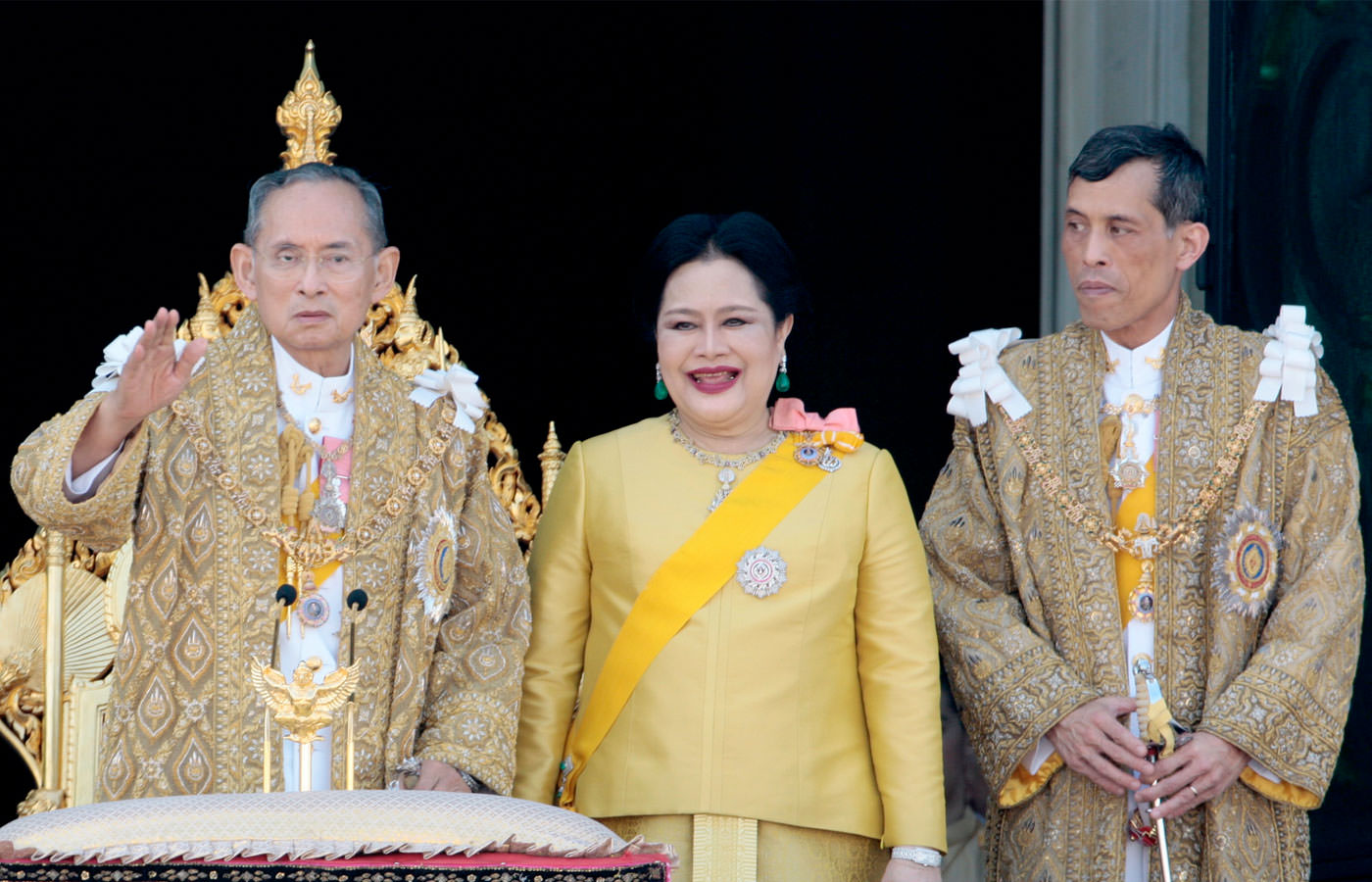 The Royal Family is hugely respected in Thailand, and any sign of disrespect can have consequences. During your holiday you might be surprised how deep this respect is. Everyone stands up before the movie at the cinema when the national anthem starts playing. It’s only a minute, don’t worry, but stand, please. In Bangkok, and even more so in Chiang Mai, the national anthem plays in the streets at 8 am and 6 pm. Absolutely everyone freezes instantly (that’s how you spot the tourists: those who keep moving with a puzzled expression on their face)

2. Don’t wear your shoes in a temple 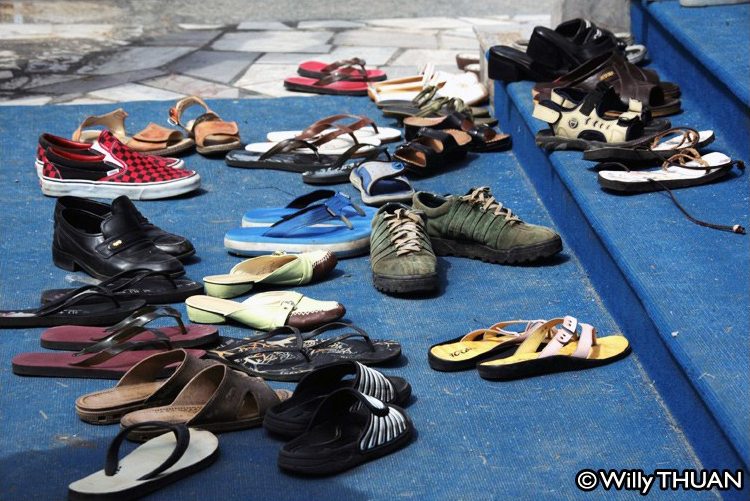 Leaving your shoes outside is well known and you probably already know that because you remember seeing a bunch of shoes abandoned in front of houses and temples. If you think about it, it does make a lot of sense not to bring the outside dirt inside your own home, especially in Thailand where people tend to sit or even eat on the floor. If you stayed in Thailand long enough, you might even start doing it back in your home country yourself!

Note that nowadays, you don’t need to take off your shoes in most shops or offices, but a decade ago it wasn’t unusual to remove them to enter some offices! In doubt, look in front of the shop: if there are shoes, do it too or ask 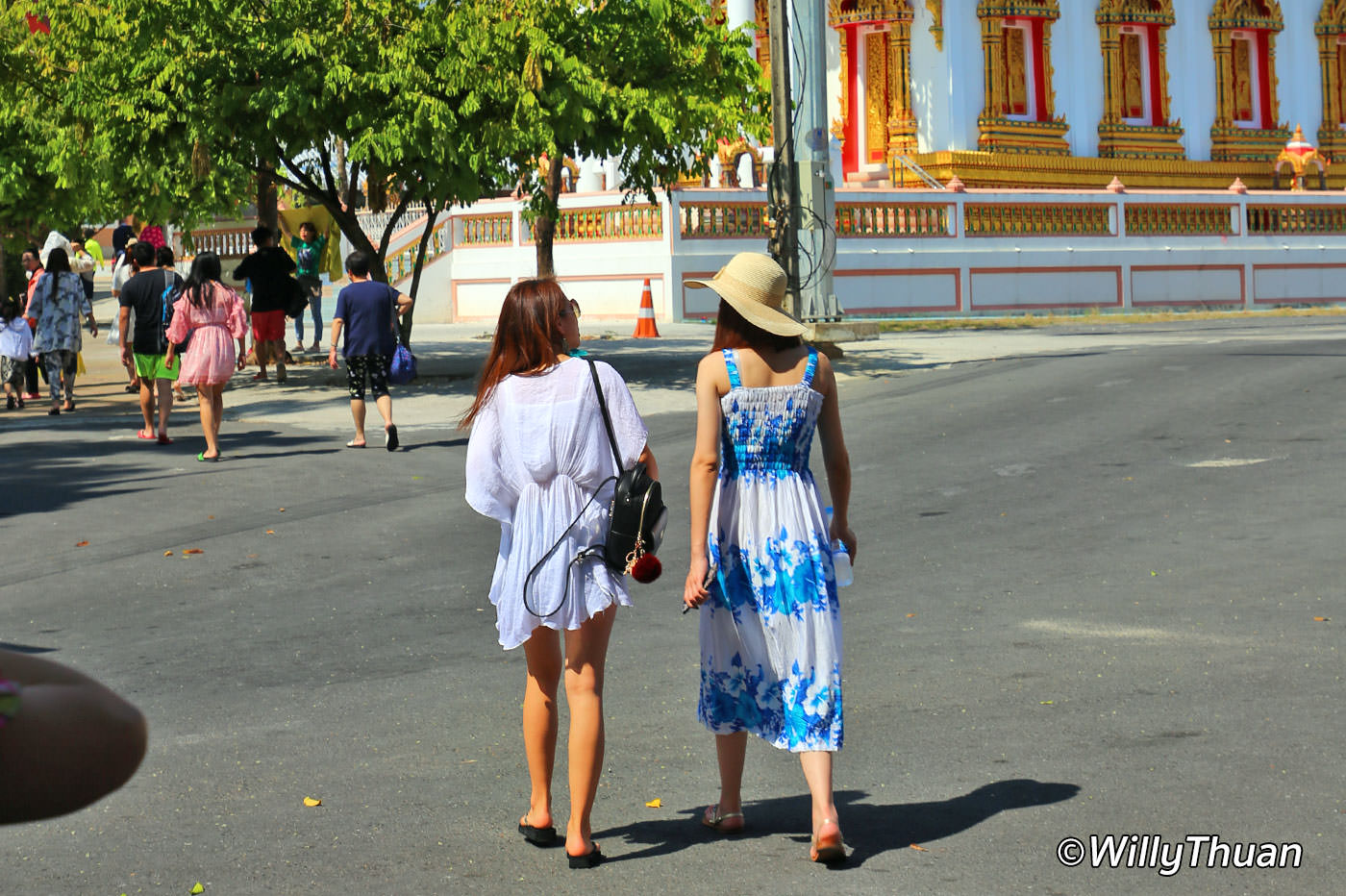 Temples are highly revered religious places, and it seems to be common sense to dress appropriately to enter a church or a mosque. At least that’s what one would think. Unfortunately, it is not unusual to see people casually walking in with sleeveless shirts or revealing skirts. Please wear at least a T-shirt with sleeves, skirts or short pants that reach knee level, and remove hats or caps. This dress code is only enforced in a few temples such as the Grand Palace in Bangkok, but theoretically, the same applies to every temple of Thailand. Monks live on temple grounds so please have some respect and decency.

4. Don’t take Buddha images out of the country 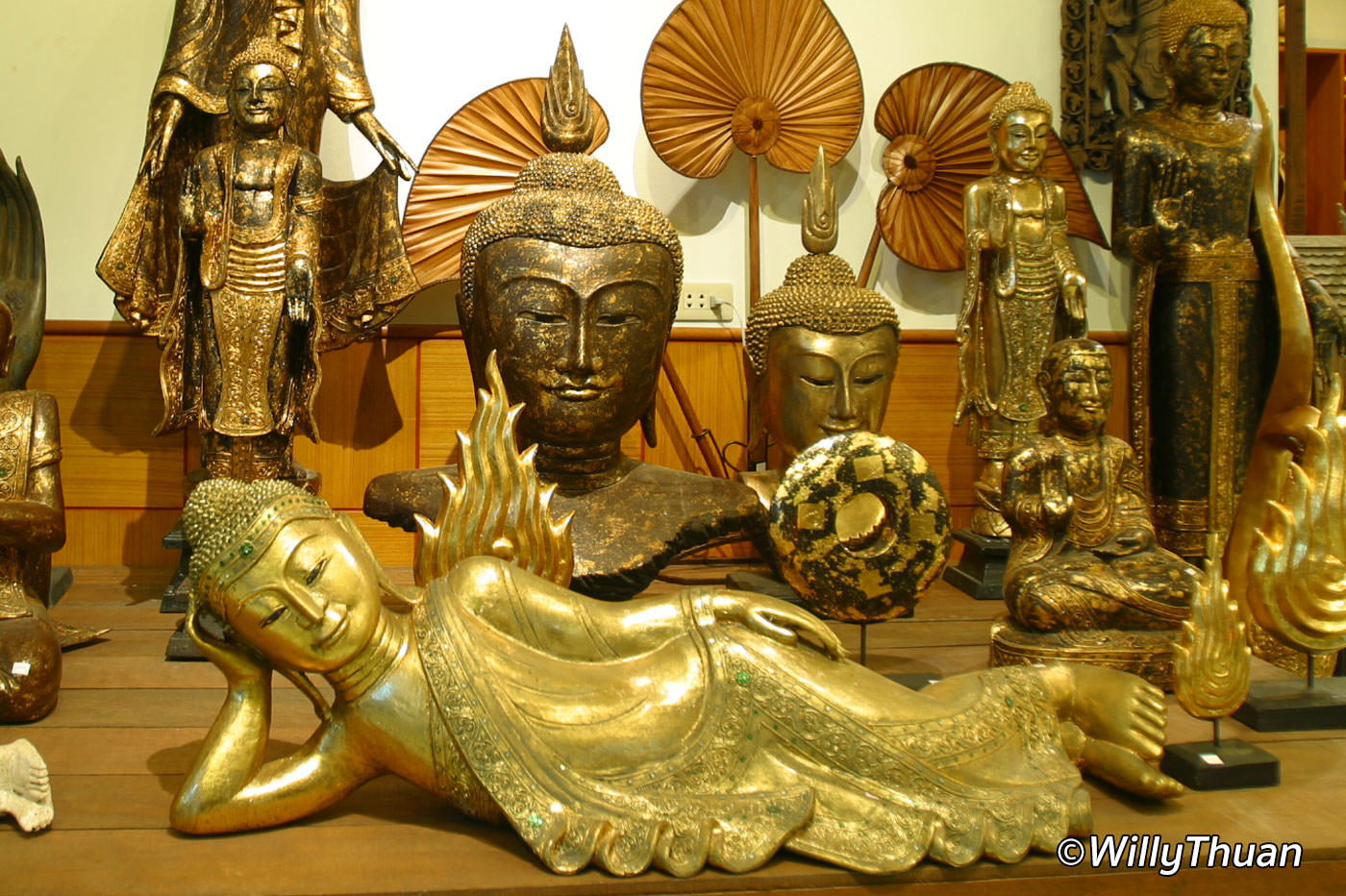 A few years ago it was considered ‘cool’ to have a Buddha image, a statue, carving or even worse: a Buddha head on a spike. These are religious items and not decorations. National campaigns helped a lot in educating travellers about this ethic, and things are getting better. However, shops still sell those attractive golden or elegantly carved stone items, and some people always buy them. If found in your luggage at the airport, unless registered, authorities may confiscated your Buddha statue or image. 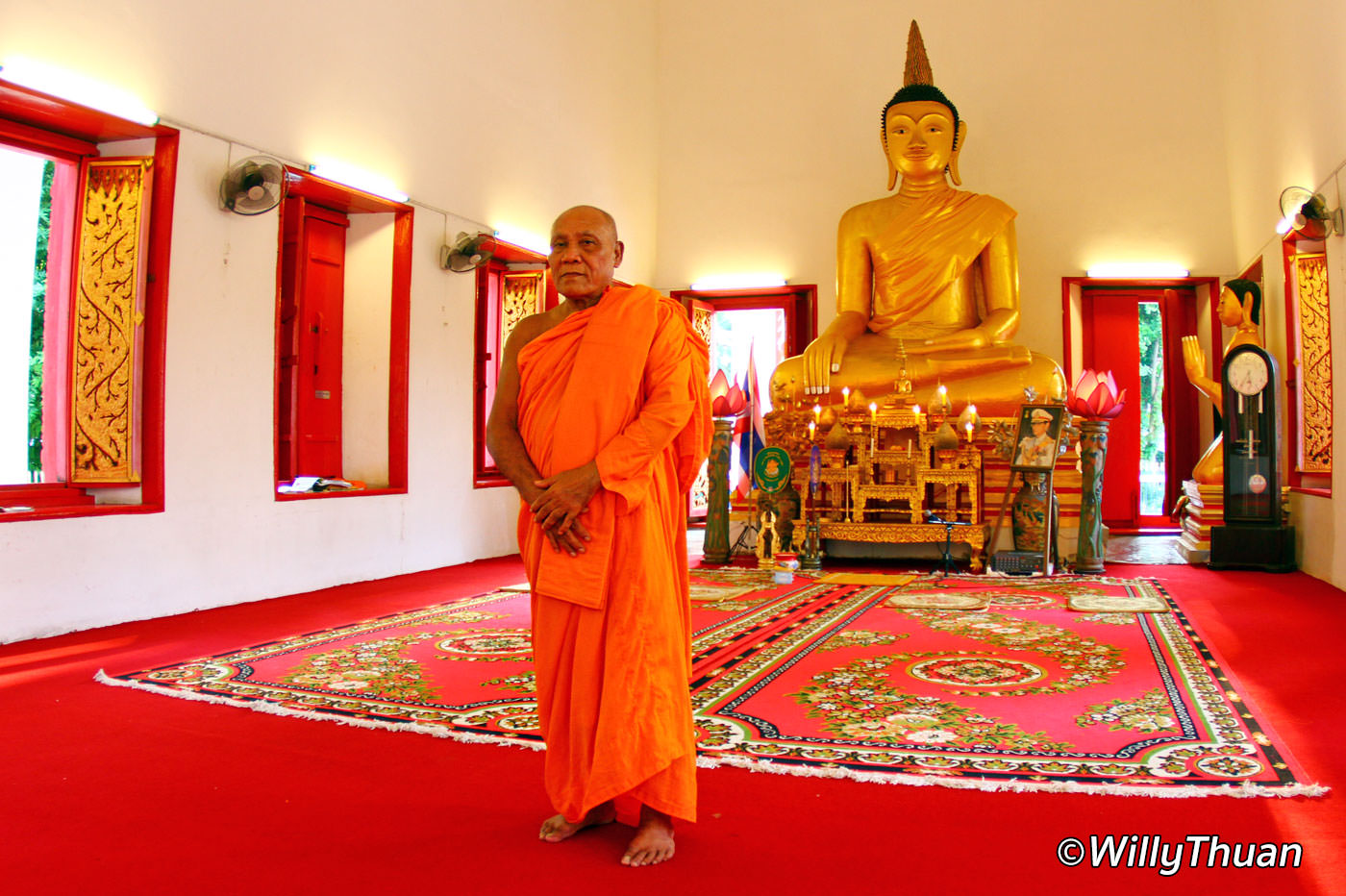 It would be best if you did not touch a monk. It may sound strange, but that is the way it has always been so if you see a monk in the street, always give way. Monks are very respected, and people step aside, and so should you.

6. Don’t point your feet at someone 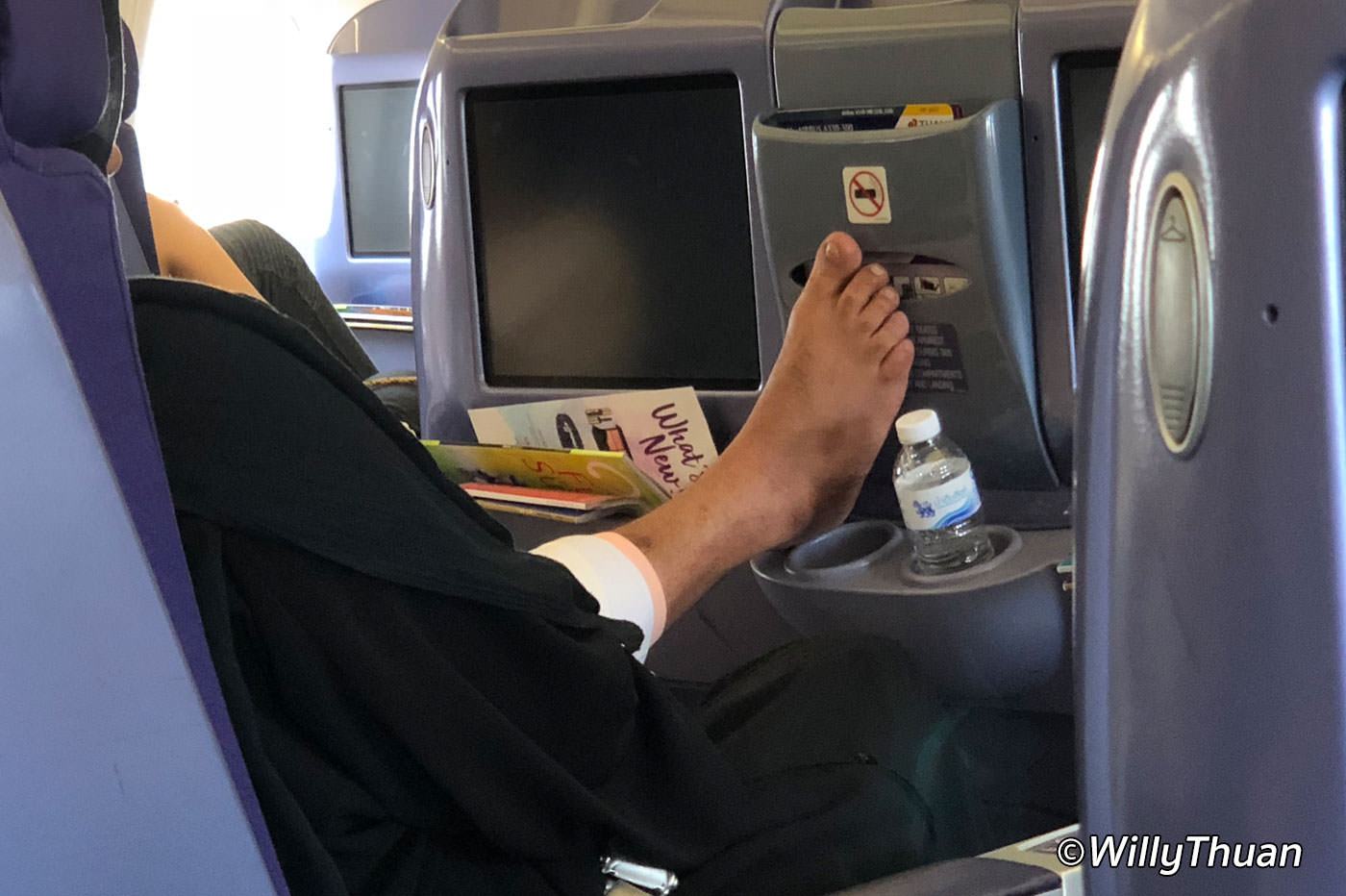 That’s doesn’t look like much but pointing your feet purposely at someone is considered disrespectful or even insulting in some cases, feet being the lowest part of the body and in contact with the dirt of the ground. Thai people being friendly and not confrontational in general, no one will tell you to remove your feet from that seat in front of you, but you’ll frown upon big time.

7. Walk around town without a shirt (and ride a bike) 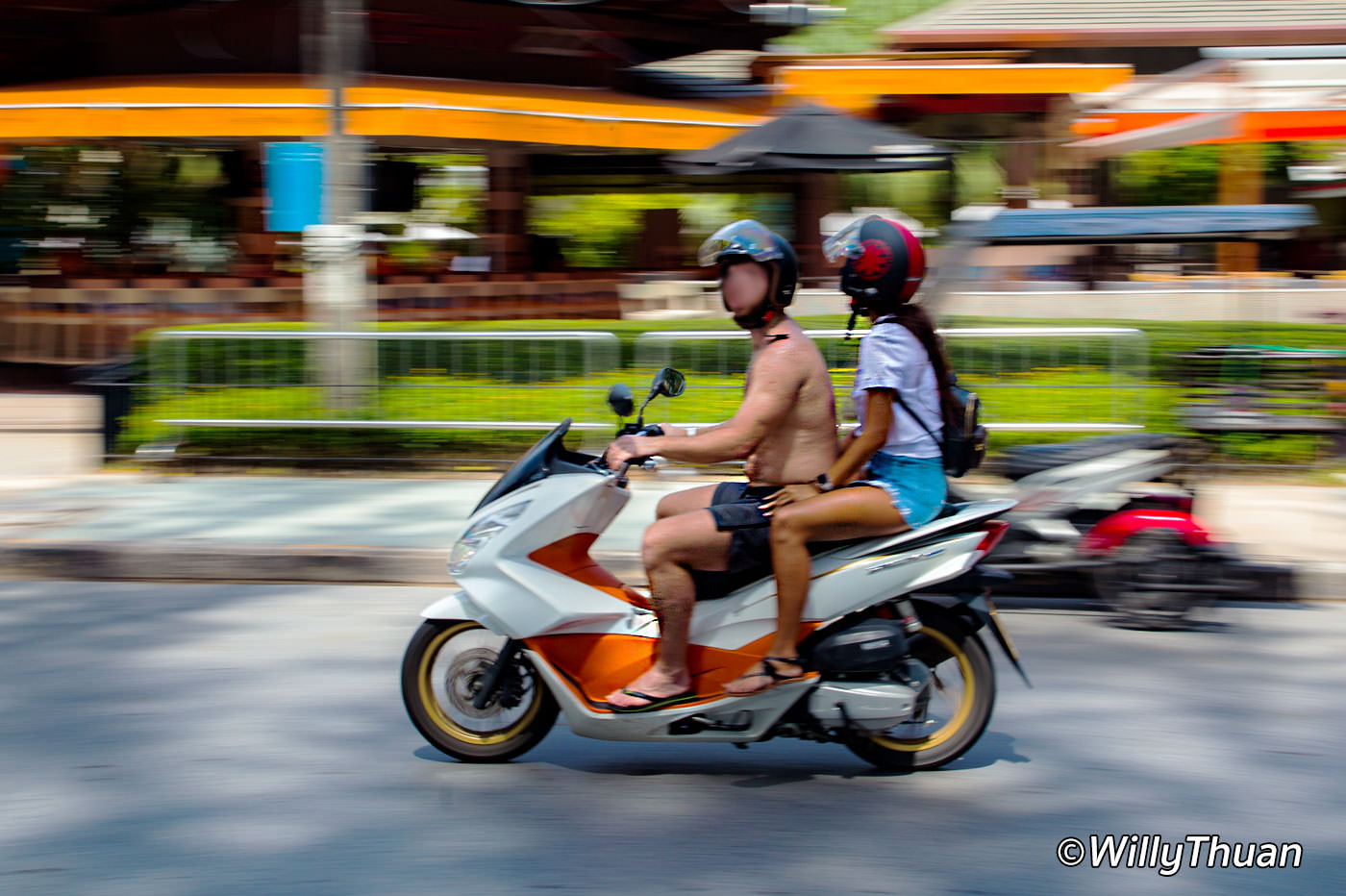 Unless you live in a coastal town, would you walk without a T-shirt in the streets of your hometown? You probably wouldn’t. (We know some will say yes, just because). The same goes here. While it’s OK in Patong and other touristic beaches of Phuket, wear a T-shirt when going inland or in Phuket town. If you ride a bike, it’s even worse; yes, it has this relaxed feeling when you drive topless, but it will be a ‘bloody painful’ feeling if you fall on the road! Anyway, even if you have a fantastic body, it’s not a pleasant sight to anyone. 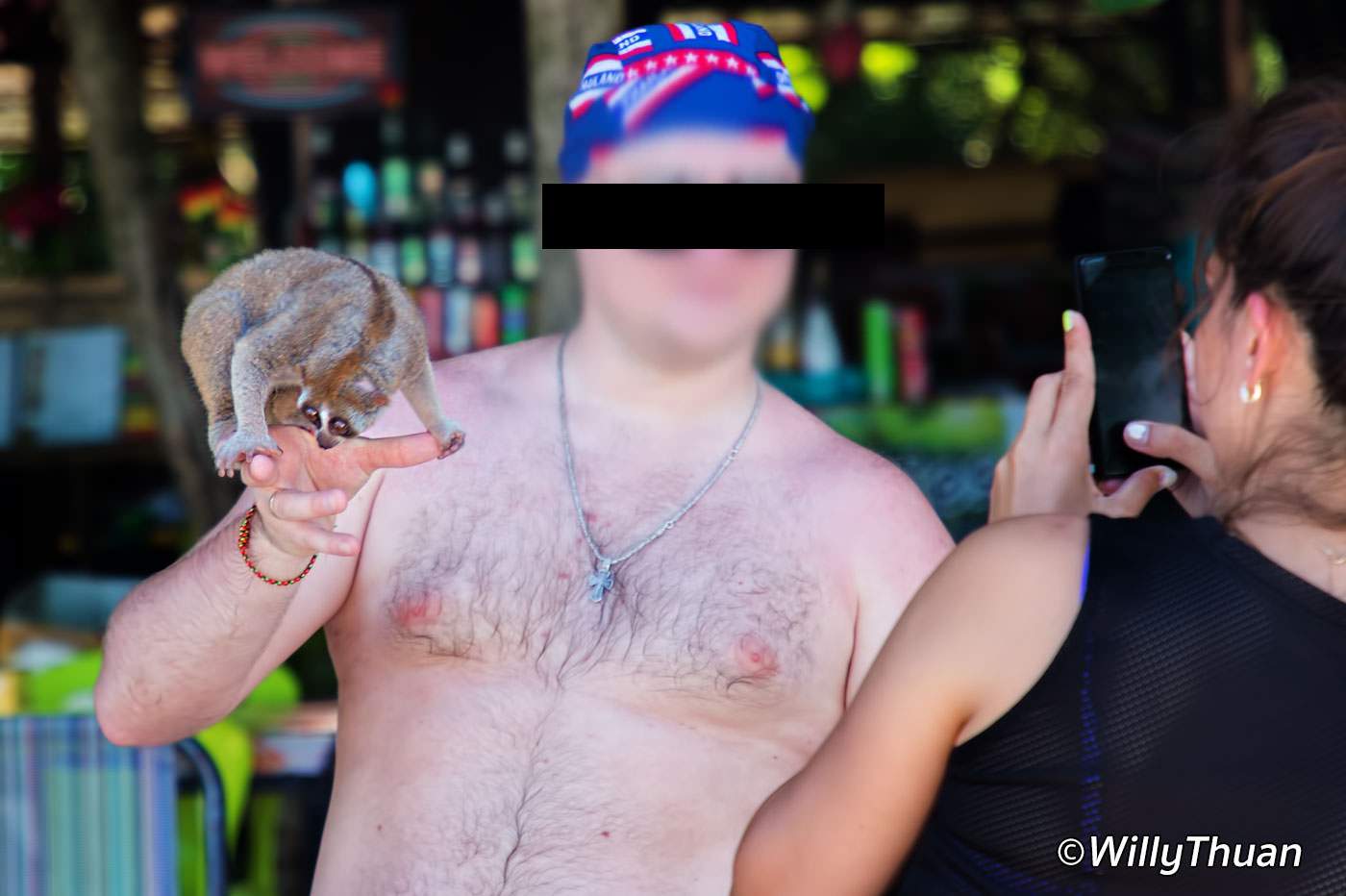 “Oh they are so cuuuute, and they look as sad as ‘Puss in Boots’! I’ve got to get a selfie with that slow loris (photo) or that cute gibbon or that weird looking iguana!”. Just don’t. These are endangered species, and people going around inviting you to take a photo for money are doing something highly illegal. By taking this photo, you are doing something illegal too, you encourage the trade, and you are making things worse for this species. Be smart. 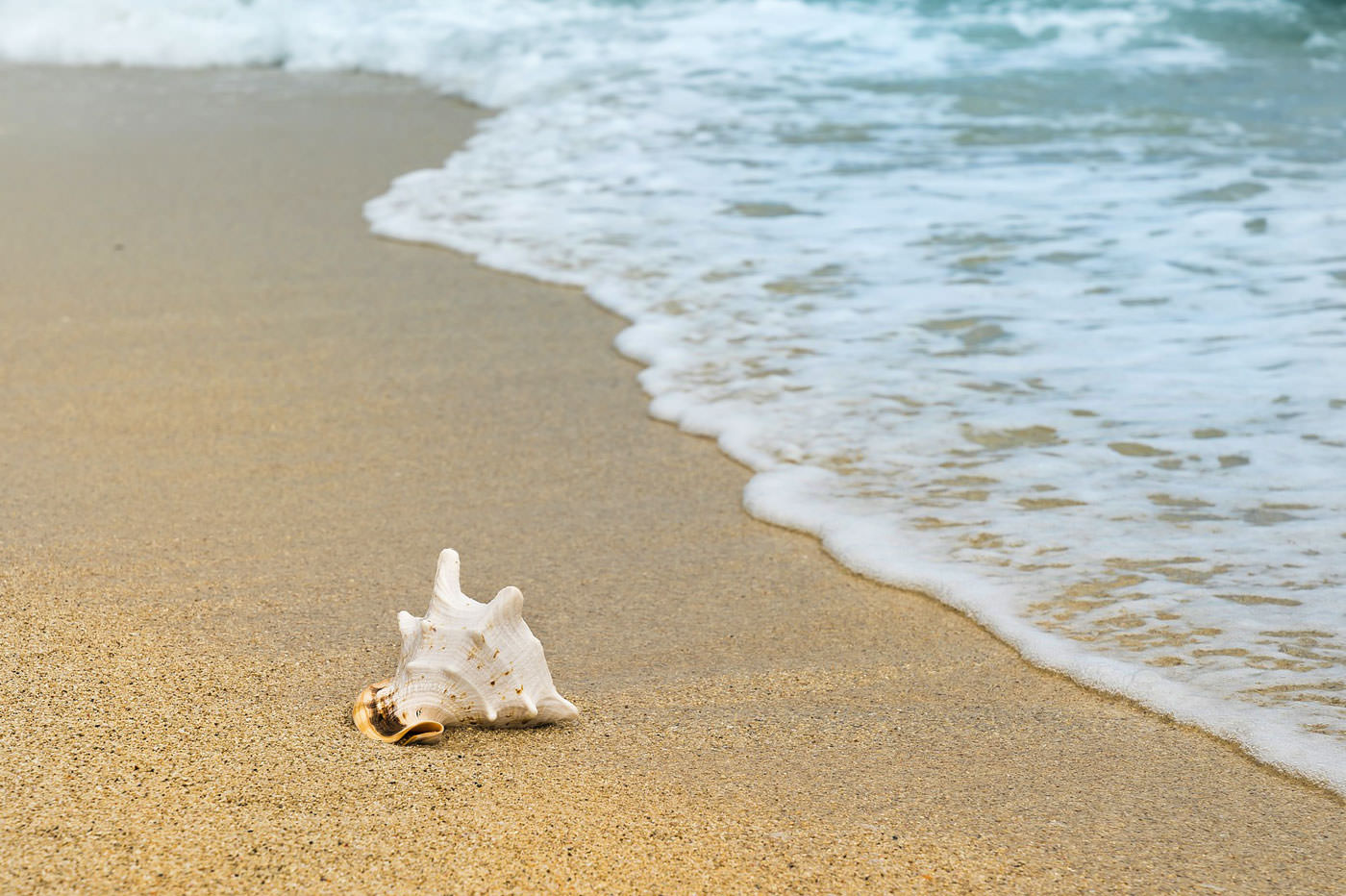 Don’t pick it up! It doesn’t look like much, and it can even be a nice souvenir, but shells and coral are protected, and you are not supposed to take any home. Eventually, you can buy some at the shop in Jungceylon and keep them in their bag to prove you didn’t pick them up, but we’ll need to clarify this point. 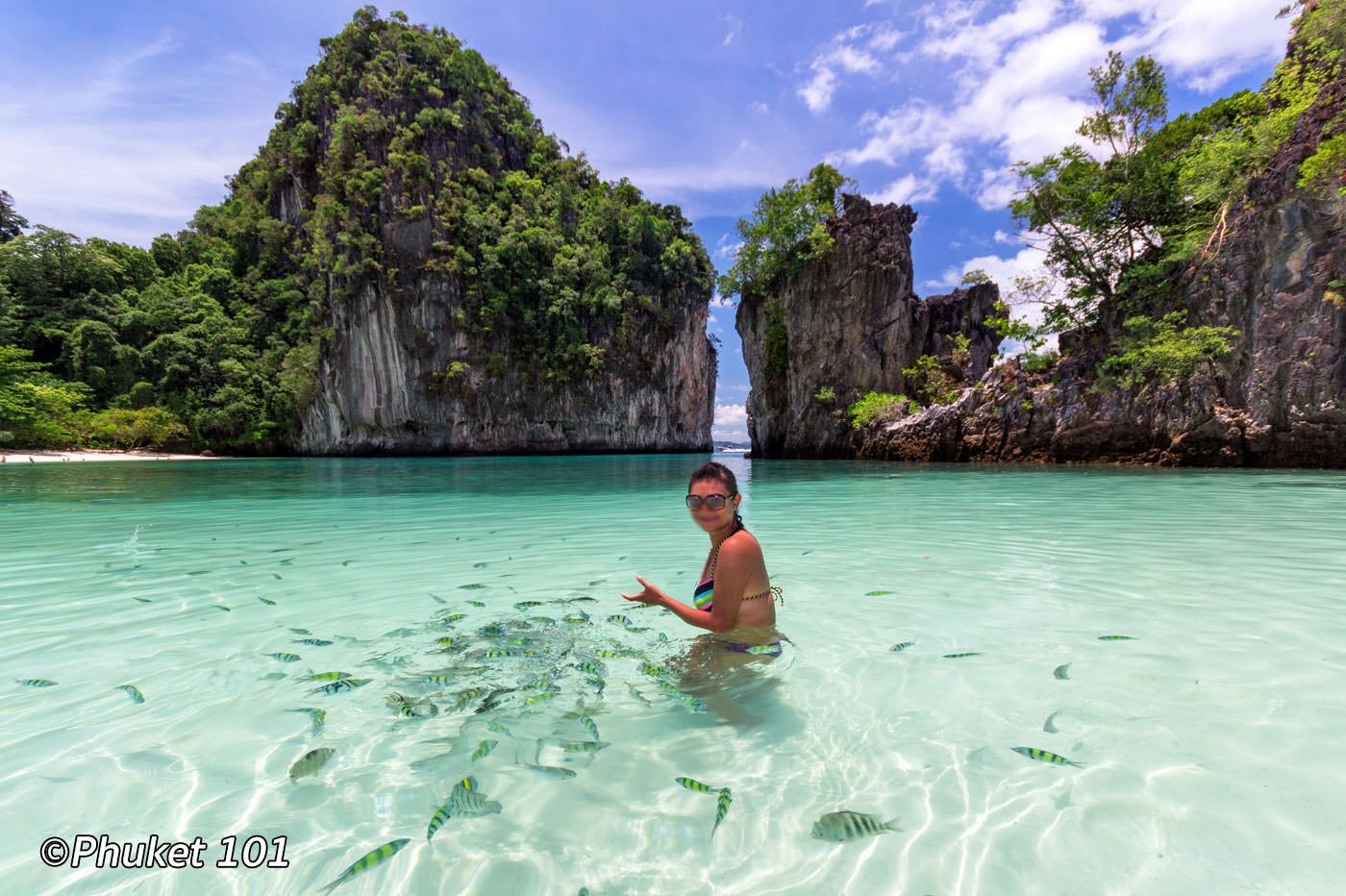 It’s frequent to be surrounded by a swarm of colourful fish when swimming on an island near Phuket. Feeding the fish seems to be a nice gesture as they look so hungry and eager to grab a piece of that toast you kept (or banana!). But beyond that simple gesture are ecological consequences you can’t see at first. Fish behaviour changes and relies on humans to survive and they stop cleansing the coral below, which starts to die. Bread contains yeast which also provokes constipation, frequently killing the fish. In protected areas, it is illegal and could get you a year in prison or a 100,000 Thai Baht fine! So no feeding and no standing on coral, please! Some might say “so why are there so many elephant trekking in Phuket then?”. What was considered casual entertainment a few years ago is slowly changing and riding an elephant is now considered animal cruelty. Elephants are respected intelligent animals, and riding them create a lot of stress. Fortunately, the new trend is to visit a sanctuary or rehabilitation camp (Tree Tops Elephant Reserve), feed the elephants and see them play by themselves in the water and mud! The same goes for any other animal displays: zoo, dolphin shows or tiger kingdoms. It is best is to avoid them!